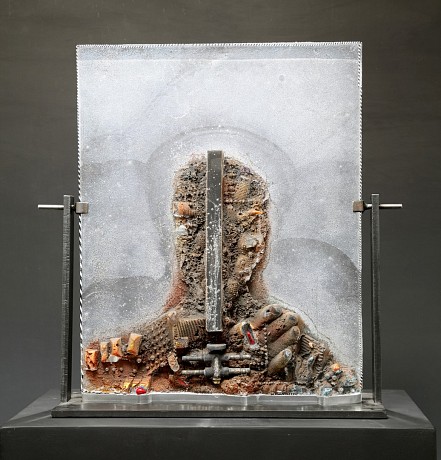 Bertil Vallien was born in 1938 and has been at the forefront of Swedish glass design since the early 1960s. He began designing for Kosta Boda glassworks at Åfors in 1963 and by the 1970s it became necessary to devote a whole glassworks to his artistic output because of his innovative sand-casting technique. In developing this technique he has created a new language in glass that will be used for centuries to come.

Today, Bertil Vallien is one of Europe's best known artists in glass, famous for his sculpted boat forms, rich with narrative imagery, and for figurative faces or masks and heads that are both enigmatic and beautiful. The boat forms have long been part of Viking tradition representing the passage from life to death. The faces and masks are expressionless but suggest fear or longing, love or hate, watchfulness and thought. Sometimes a face or mask is the whole sculpture, sometimes it peers out from within a modernist form, suggesting a trapped soul.

One of Vallien's best-known sayings is "Glass Eats Light", referring to the way in which glass is contained within the glass mass. Vallien is a master of controlling the inner light, which for him adds to the spiritual and symbolic content of the work. His many significant commissions have included an altar with Stations of the Cross in Växjö cathedral in Sweden and a sculpture for the Corning Headquarters in the USA.

Since the early 1960s, Vallien has been honored for his work in glass. His most impressive accolades include Second Prize at the 1985 Zweiter Coburger Glaspreis in Coburg, Germany; the Visionary Award from the Museum of Arts & Design in New York; the 2005 Gold Medal granted by the Royal Swedish Academy of Engineering Sciences and an Honorary Doctor of Philosophy degree from the University of Växjö, Sweden. Vallien's work is owned by some of the world's most important museums, including the Art Institute of Chicago in Chicago, Illinois; Corning Museum of Glass in Corning, New York; Glasmuseet Ebeltoft in Ebeltoft, Denmark; Metropolitan Museum of Art in New York, New York; National Museum Stockholm in Stockholm, Sweden and The State Hermitage Museum in St. Petersburg, Russia.