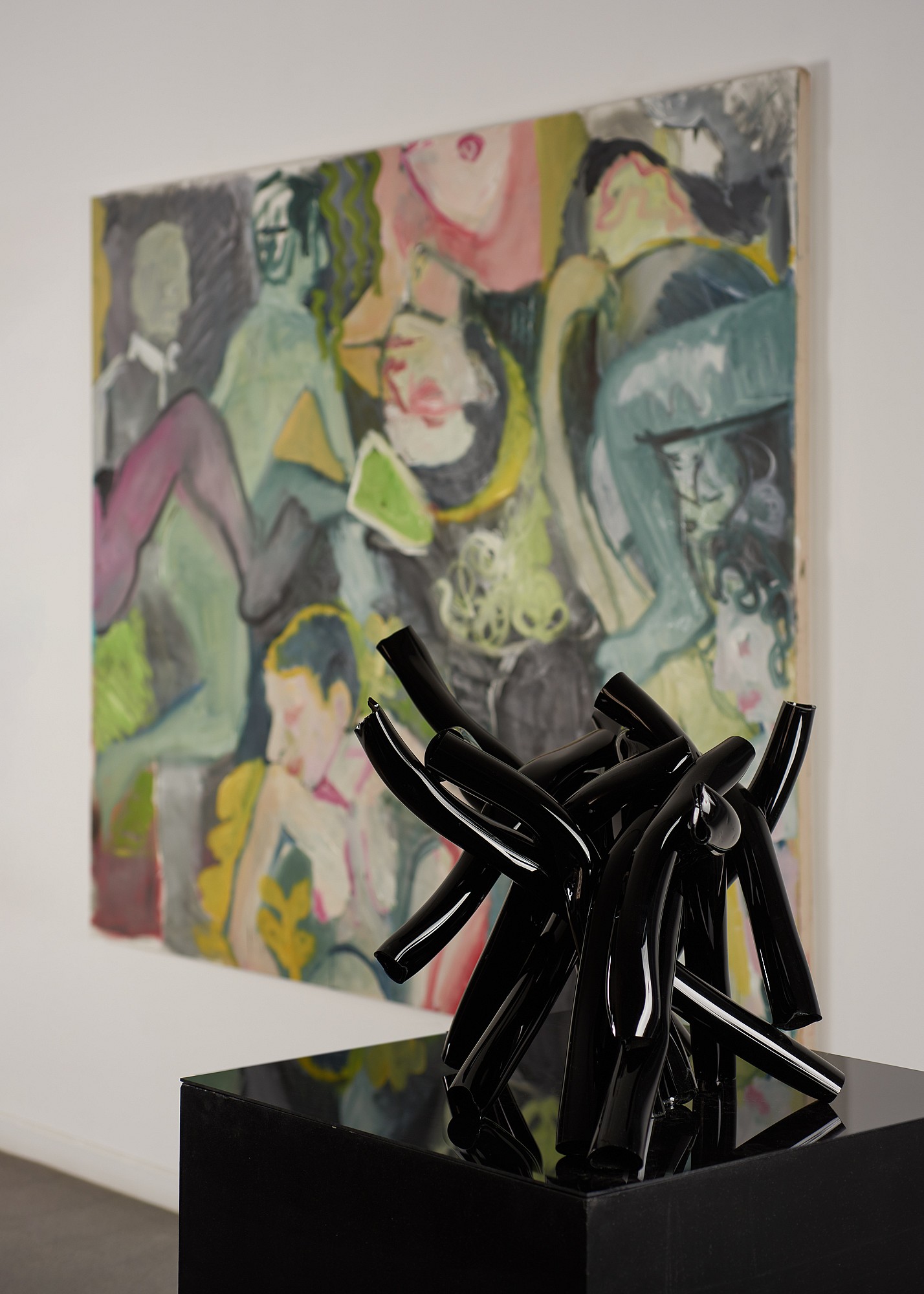 Girotondo means round dance, the type of popular folk dance common among many societies and cultures, each with its typical style, based on the perfect circle. Round dances express a desire for a complete and harmonic arrangement of a group of people, representing thereby the for a non-hierarchical equal society. The exhibition title comes from Michele Bubacco’s monumental work, shown here for the first time.

The exhibition’s central ideas and concepts originate in the world of dance: movement, rest, rotation, and troupe. These ideas merge and reflect in the paintings and glass sculptures and indicate the relations between movement and creation – two expressive forms. Some of the works represent movement and figures uniting, others pay attention to pauses and gaps between bodies. Pina Bausch, a leading   modern dance, created works inspired by visual art. Bausch redefined the ties between art, life and dance, with human relations at the center: the difficulties and traumas they involve and the gentleness and compassion they bring to human life. Her works paved the way for unbridled dance in which the boundaries between madness and synchronization are constantly transgressed, just as in neoexpressionist art. The works in the exhibition are informed by the history of art and dance and are enmeshed in an intricate dialogue in which contradictory values coexist – physical enjoyment and spiritual elevation, unruliness and sophistication, attraction to another and fear of intimacy and attachment.

Another link between dance and the artworks on display is the relation of movement and sight. “The artist changes the world into paintings. To understand [this] we must go back to the working, actual body—not the body as a chunk of space or a bundle of functions but that body which is an intertwining of vision and movement” – wrote Maurice Merleau-Ponty. [1] His essay “The Primacy of Perception” enumerates on the connection between what the eyes receive from the external world and the seer’s internal and spiritual interpretation. According to the French philosopher, the eye traces the space of life and therefore movement in space is the natural continuation of seeing. Dance stretches the limits of the body, while plastic art, created through the artist’s bodily movements, stretches the limits of matter. Approaching the limits of the body or the material manifests the connection between physical object and spiritual existence.

As the works of the exhibition show, the physical bodies of artists have a vital role in instilling spirit into the material. Ofer Lellouch transforms his spiritual experience into painting; Michele Bubacco produces a performance-like painting using a dishwashing sponge, thereby imprinting the markings of his body into his painting; Sara Benninga’s series of paintings hangs in a row in the studio, conjuring the sense of a dance consisting of movement and pauses; Julius Weiland sculpts in industrial glass which he melts at high temperature, forcing him to act fast before the glass cools and sets; in Sphere, the glass egg created by Vaclav Cigler, the perfect geometric shape marks the search for a clear and pure aesthetic essence.