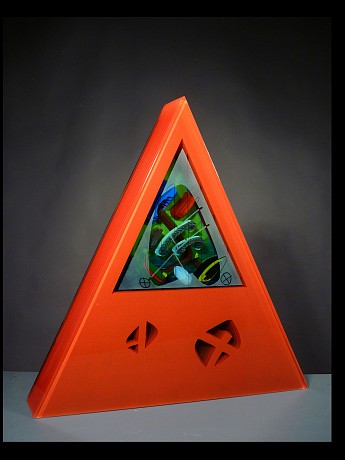 Bohumil Eliáš Sr. (1937-2005) was a leading figure of the 20th-century Czech studio glass scene who, with his versatile and original work, also earned renown in the international context of modern glass art as a unique artist and respected artistic personality.

Eliáš’s natural artistic talent developed through his studies at the Secondary Applied Arts School of Glassmaking in Železný Brod, later, between 1957 and 1963, at Professor Josef Kaplický’s studio of monumental painting and glass at the Prague Academy of Art, Architecture and Design. There he had time to develop his painterly perception and personal style of working with colour that had, from the outset, been dynamic. At the same time, however, his orientation towards glass became more pronounced. The mutual connection between these two artistic fields would subsequently form the definitive basis of Eliáš’s artistic expression.

A milestone in the development of Eliáš’s glass sculpture came in 1975. In producing windows for the Gothic Church of the Virgin Mary in Dobříš near Prague, he was the first to use the principle of the horizontal layering of forms cut out of sheet glass. He then applied this visually effective means of working with glass in a series of monumental projects for architecture. At the same time, the layering of glass plates became one of the main areas of his private form of expression in free glass sculptures. These sculptures were initially based on the interplay of plastic forms modelled by the fragmented refraction of light at the edges. From the early 1990s, however, he began using paint on the individual layers in order to create the illusion of deep inner spaces in the material of the block. He reduced his shapes to simple cylinders and prisms modified by cutting. Using this technique he created objects reminiscent of steles that were monumental in their silent strictness.

Painterly feeling formed the unifying basis of Eliáš’s artistic personality, which is why, parallel to his glass sculpture, he was also active in the field of painting. Until the mid-1980s these two areas had specific and distinct expressive characteristics. Both artistic paths merged into a new form in 1985, when Eliáš had the opportunity to apply his dramatic painting on blown hollow glass forms. He began producing work that used the spatial form of the glass shape for painting as well as involving its special light-based qualities. For Eliáš these works meant a definitive fusion of painting and glass sculpture.

The point of departure for Eliáš’s painted glass object-pictures was, from the 1990s, bent and relief-shaped flat glass sheets. The glass shape became the bearer of painted compositions that drew on the entire diversity of Eliáš’s original expression. Glass enabled paint to span space, imbuing it with a magical play of light in the form of translucent paint layers and allowing it to develop three-dimensionally into imaginative spaces beyond the reality of the object itself.

Bohumil Eliáš’s art was, from its very beginnings, an elemental eruption of the pure need to create. He did not look for new forms simply to make his work more individual. He chose unusual techniques and combinations because he felt them to be a necessity in fulfilling his ideas. He employed expressive colour and formal diversity to the full.

Eliáš’s fruitful artistic career lasting over forty years came to an abrupt end just at the moment when, with his renowned intense enthusiasm for creating new forms in his work, he was beginning to develop new forms of his work and formulate a distinct expression in his glass and in his painting. His sculptures and paintings remain in dozens of collections, both public and private, in the Czech Republic and other countries as works by an exceptionally inventive and independent artist of international significance.