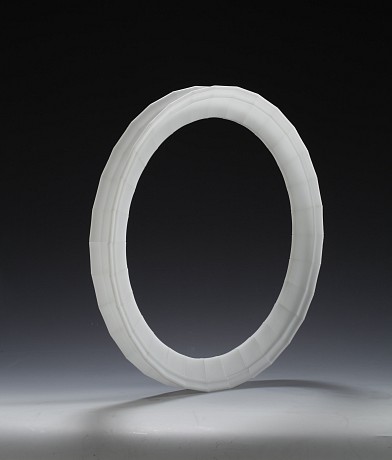 Born in Lynn, Massachusetts in 1957, Daniel Clayman is a product of the studio glass movement. Before beginning his training as a glass artist, Clayman worked as a theater lighting designer. His early life theatre experience clearly bore fruit in his later work as a glass sculptor, which has consistently revolved around the effects of light and shade on the objects themselves and on their surroundings. After earning a BFA in Glass from the Rhode Island School of Design in 1986, Clayman set up his studio near Providence, Rhode Island, where he has been working since.

Clayman work accept is a true testimony to how the artist accepts wholeheartedly the special challenge posed by glass in exploiting its inherent characteristics without being seduced by them. 'Nothing in space shows until light reflects it', he has said, a statement that testifies to an almost scientific approach. In the 1990s Clayman based his sculptures on organic forms. His Pods, for example, containing pale colored glass inside, but sheathed in bronze on the outside, resembled plants. Their cavities sparked an intriguing play of light and shade. The artist has since changed his formal vocabulary radically, embracing geometry and abstraction. His work now features pyramidal shapes, cylinders and rings, some of them more than one meter high. Color has receded into the background: the sculptures are dominated by a semi-opaque white that appears in broken shades. Clayman displays his sculptures effectively, spotlighting them in dark surroundings, as though they are on stage. Critics have previously detected in his work the influence of sculptors like Constantin Brancusi and Tony Cragg. In his hands glass certainly becomes a sculptural material equal in rank to stone, wood and metal.
Clayman's work is represented in the public collections of Corning Museum of Glass in Corning, New York; Museum of Fine Art in San Francisco, California; Museum of Fine Arts in Boston, Massachusetts and Smithsonian American Art Museum and the Renwick Gallery, Washington D.C.