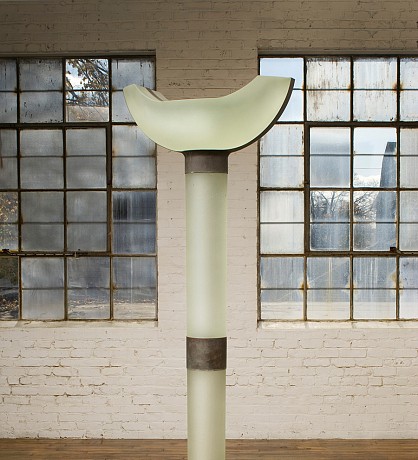 Ben Tré’s work has been featured in 54 solo exhibitions in the U.S. and abroad, including a ten-year retrospective organized by the Phillips Collection in Washington, DC, that traveled nationally. Other one-person exhibitions of sculptures and drawings include those organized by the Musée d’Art Moderne et d’Art Contemporain in Nice; the David Winton Bell Gallery at Brown University; the Toledo Museum of Art; and the Cleveland Center for Contemporary Art. A retrospective exhibition including sculptures, works on paper, drawings, and public projects, organized by the Scottsdale Museum of Contemporary Art, finished its national tour in 2001, while a recent exhibition at the State University of New York, Buffalo, highlighted his work and vision for the realm of public art and the role of the artist in the public dialogue. Currently, the exhibition “Howard Ben Tré: The Lightness of Being” is touring four museums. Ben Tré has lectured extensively about his individual sculptures and his public projects and philosophy in the U.S. and abroad.

Ben Tré’s breakthrough technical innovations have extended his mastery of cast glass and allowed him to create monumental sculptures that can survive the rigors of outdoor installation. Among Ben Tré’s public commissions are the award-winning installation of fountains and seating created for Post Office Square Park in Boston; the plaza and sculpture for BankBoston’s headquarters in downtown Providence; a sited sculpture for the plaza at the Rhode Island Convention Center, Providence; and an interactive fountain for the hall of the newly renovated Mary Baker Eddy Library in Boston. Public commissions include the plaza and seating for the federal courthouse in Las Vegas; the pedestrianization and street scheme redesign of Warrington Town Center in England; sited artwork for Siebel Systems and interactive artwork for the Thea Foss Waterway Esplanade in Tacoma; a glass “wall” for the University of Michigan Ross School of Business; and plazas, with sculpture/fountains and landscaping, for Target Corporation Headquarters in Minneapolis, Bank of America’s Hearst Towers in Charlotte, and Brown University, Providence.

Howard Ben Tré was born in Brooklyn, New York, in 1949. He received a B.S.A. from Portland State University in 1978 and a M.F.A from the Rhode Island School of Design in 1980. He is a three-time recipient of the National Endowment for the Arts Fellowship and a three-time recipient of the Rhode Island State Council on the Arts Fellowship. His achievements in the visual arts were recognized by the First Annual Pell Awards for Excellence in the Arts (1996), the Artist Award of Distinction by the National Council of Art Administrators (2005), and the Aileen Osborn Webb Award (2006). His public art has been recognized with awards by the Providence Preservation Society for Urban Design (1998), the British Council for Shopping Centres for Town Centre Environment (2002), and the Royal Town Planning Institute for Best Urban Design Project (2002). Ben Tré currently lives in Providence, Rhode Island.