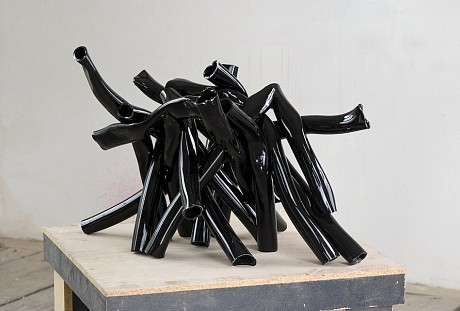 Julius Weiland was born in Lübeck in 1971. From 1995 to 2000 he studied industrial design under Katsuhito Nishikawa and Ann Wolff at the Hamburg Art Academy, attended the Pilchuck Glass School at Stanwood, near Seattle, and completed periods of practical training in Swedish glass factories. He finished his studies in 2001 with a diploma from the Hamburg Academy and then set up as an independent artist in Berlin, establishing a studio in an abandoned factory.

Weiland sees himself as a sculptor. Mechanically manufactured glass tubing used for making laboratory appliances forms his raw material, which he cuts by hand and then fuses in fire-resistant molds of his own making. He controls the fusing process by reducing the heat in the furnace, or turning it off altogether, when the individual tubes are still just about upright or have partly collapsed. This is a similar kind of action to that carried out by glassblowers at the furnace. Yet the activity embodied in Weiland's objects and sculptures seems to continue after they have cooled and solidified, for light striking them gives them a life of their own, as though they were performing on a stage. Their component parts - the tubes - appear to twist and turn, pointing this way and that, collapsing together, emitting reflections or emerging from darkness as though picked out by a searchlight.