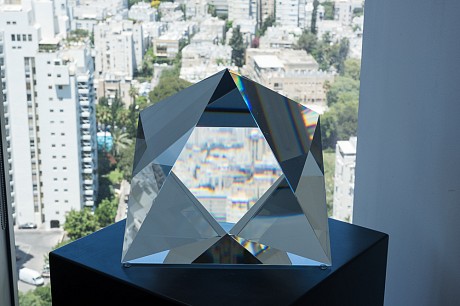 "I use glass as a mediator for observation and meditation," says Václav Cigler. From 1965 to 1979 this approach guided his teaching as head of the department of architectural glass that he had established at Bratislava art academy. Cigler has not only influenced countless students in his native country; his stylistic example has also affected generations of glass artists abroad. Born in Vsetín in 1929, he underwent the classic Czechoslovakian training. After attending the glass school in Nový Bor, he transferred to the School of Applied Art in Prague, where he studied under Josef Kaplický from 1951 to 1957. Today he works as an independent artist in Prague.

Cigler acquired a reputation in the 1960s for geometrical objects made from cut solid optical glass. Light played a crucial role in these, reflected along the edges and in the fissures of the glass. In the next decade his search for new ideas and ways of realising them led him to move beyond work dominated by aesthetic concerns. Rather than disrupting the unity of a block by means of reflections, he began exploring the kind of interplay between interior and exterior spaces possible only with transparent glass. He was soon taking this approach to its logical conclusion, incorporating other materials, embracing large formats and developing ideas for pieces in urban and natural settings. One of these employed a series of shiny glass and metal diagonals to map out the space of a theatre foyer. Another consisted of a trail of glass and light inserted into a street so as to create a contrast between reality and the seemingly unreal. Yet another featured large hemispheres of transparent glass resting on the earth so that they reflected the sky and nearby treetops. Cigler sees such works as aiding people to exist in harmony with their surroundings. In this way he uses glass to investigate the cosmic order and its meaning.

Cigler's work and installations have been displayed in Europe, North America and Asia. His work is included in numerous prominent collections, including Corning Museum of Glass in Corning, New York; Glasmuseet Ebeltoft in Ebeltoft, Denmark; Kunstsammlungen der Veste Coburg in Cobug, Germany; Musée des Arts Décoratifs in Paris, France; Slovakian National Gallery in Bratislava, Slovakia and Victoria & Albert Museum in London, England. Cigler is the recipient of numerous honors, including the 1968 Prize for Decorative Art of the Union of Czechoslovakian Fine Artists and Honorary Prize at the 1985 Zweiter Coburger Glaspreis in Coburg, Germany.